A-ha! That got your attention didn’t it! No one likes tax!

What would you do if I said I had a way of reducing everyone’s tax, and it doesn’t cost anything? No, I’m not crazy. Have a look at these statistics:

The top 5 causes of death in Australia are:

Of the top five causes of death in Australia, four are considered to be preventable in most instances.

In 2008-2009, preventable disease cost the Australian taxpayer 27 Billion dollars (one third of allocated health expenditure in the country), through hospital or home care, or Medicare rebated treatments.

“We’re an ageing population. We’re getting overweight, smoking, drinking too much and exercising too little.”

The Australian Institute of Health and Welfare has estimated that in the same year, health system expenditure on chronic diseases included $7.74 billion for cardiovascular disease, $5.67 billion for musculoskeletal conditions, $4.95 billion for cancer, $4.59 billion for respiratory conditions and $1.52 billion for diabetes mellitus.

To put this in perspective, we the taxpayers, are spending almost 6 times more money on treating preventable disease than we are in foreign aid. ($5 billion)

We are spending about the same on treating heart disease alone each year as the estimated cost of the fancy, state of the art, proposed new Sydney Airport.

People who suffer from heart disease cost their employers on average 2.5 times more sick days than their co-workers. This then costs the economy. Lots.

What I’m getting at here, is that we spend a heck of a lot of money on chronic, preventable disease, and you and I are footing the bill.

How can we avoid this?

The biggest contributors to the cost burden of chronic disease are as follows:

These conditions have lots of associated conditions such as raised blood pressure or liver damage, which are precursors to the causes of death listed above.

We’re an ageing population. We’re getting overweight, smoking, drinking too much and exercising too little. We’re the reason that health costs are through the roof and hospitals are bulging at the seams. 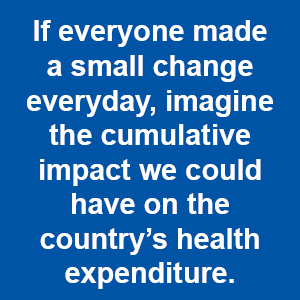 You can do something about it: don’t become a statistic!

Think about it – if we could all quit smoking, limit ourselves to 4 alcoholic drinks per week, and swap the donut for an apple, imagine the cumulative impact we could have on the costs associated with keeping our sick selves alive?

I know it doesn’t sound like much fun. It’s boring, I get it. The problem is, unless we suck up the boring-ness of it all and embrace healthy eating, exercise and the cessation of smoking, we’re heading for a dramatic overload of our hospitals, poor care, increasing costs and (much!) longer wait times for hospital admissions.

Even little things like getting off a bus stop earlier and walking the rest of the way to work is enough to improve these statistics. If EVERYONE did it together, as a society and as a team, our health costs and expenditure would be far more manageable.

Next time you’re thinking of heading to Maccas, or skipping your walk for a Game of Thrones re-run (again), ask yourself, is it worth the extra couple of thousand on tax?

Claire is the Chair of Osteopathy Australia’s Public Relations Commitee – as such is often required to comment on various media releases, news articles and opinion pieces.

Shaun is an Osteopath, and co-owner of Chadstone Region Osteopathy. Graduating from Victoria University in 2011 and currently consulting in Oakleigh and Camberwell.

Ainslie is an Osteopath currently consulting in both our Oakleigh and Camberwell Osteo Clinics. She is also the head trainer for Hampton Rovers VAFA football team.

Our Osteopaths are available in all clinics for face to face consultations.

We have strict hygiene procedures in place, along with pre-appointment health screening.
If you feel unwell, please call us before booking.